Pop South is pleased to welcome a discussion with Anne Sarah Rubin, Associate Professor of History at the University of Maryland Baltimore County, on her new book Through the Heart of Dixie: Sherman’s March and American Memory.  This is Rubin’s second Civil War-related monograph, the first being A Shattered Nation: The Rise and Fall of the Confederacy, 1861-1868.

PS: What drew you to write a book about Sherman’s March?

It came from a confluence of events when I was back in graduate school:  I read and loved Charles Royster’s The Destructive War, where he analyzed the ways that Americans become accepting of a different, more devastating to civilians, sort of war.  I saw Ross McElwee’s Sherman’s March, which made me think a lot about the reasons that this one event continued to resonate. I also heard about and ultimately read James Reston’s Sherman’s March and Vietnam which didn’t ring true to me.  And finally, the opportunity to really engage critically with Gone with the Wind, one of the great Southern novels, was irresistible.

PS: How is your book different from other books on the March?

I think my book is different because it doesn’t simply retell the story of the March, but rather tries to get at the ways that Americans ascribed meaning to this event. To that end I look at the March and its aftermath from a range of perspectives: Southern white civilians, African Americans, Union veterans, and travelers. I also see how perceptions and portrayals of the March changed over time, from 1864-65 up through the present day.

The other difference is broader, and more about the ways that historians talk about “memory.” I didn’t want this to be a book that argues that there is one story of Sherman’s March and that lots of the stories people told were false and here’s why. Rather, I was interested in why certain narratives persisted and others didn’t. So I consciously shifted away from the language of “memory” to the language of “storytelling.”

PS: For the readers of Pop South, can you talk about the various sources of popular culture that you drew upon? Is there anything specific that really grabbed your attention?

I had a great time doing that research—I looked at fiction, poetry, films, photography, art, and music. The novels about Sherman’s March were generally pretty formulaic—lots of 19th century “romance of reunion,” although some of the 20th century novels, like those by Cynthia Bass and E. L. Doctorow were very powerful.

I liked working with Herman Melville’s two poems about the March, “The March to the Sea” and “The Frenzy in the Wake.” He’s able to show two completely different views of the same events, and it tied in so well with what I was doing. I also became really interested in George Barnard’s photographs, and the ways he did—or didn’t—represent the March.

PS: Your book explores some of the misconceptions surrounding Sherman’s March? What is the biggest misconception about this event?

I think the biggest misconception is that the March mowed down everything in its path, and left Georgia, South Carolina, and North Carolina as smoking ruins. It was much more narrowly focused. Whenever I give talks I always say the same thing: “It’s a mistake to imagine the March as mowing down everything in its path; rather it’s better to think of it as rows of stitches, with untouched spaces in between.” 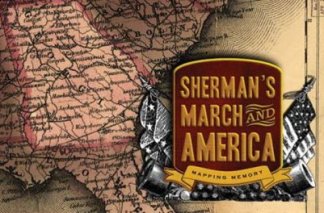 I wanted to explore new innovations in digital history—I had worked on a large digital project in Grad school, and wanted to get back to it. Specifically, I wanted to use digital media in historiographical ways, making the same kind of arguments in my book, making ideas about memory visible. Fortunately, we have an amazingly talented group of visual artists/animators at the IRC who have been working on some of these kinds of projects or questions for years. Through a collaboration with Dan Bailey, and especially Kelley Bell, a professor in Visual Arts, we came up with a scheme for all of this, funded by an ACLS digital innovation grant and then UMBC.

We decided to use maps as our guiding metaphor and interface. The maps would be a way into the myriad strands of memory.   But I didn’t want just one map—I wanted several, in order to represent the different kinds of accounts I was using. Then I could get the multiple perspectives across in a visual and intuitive way. The idea of a journey seems a natural metaphor for the kind of exploration and excavation I’m doing in the larger project. We ultimately settled on five different maps, each with a different look and feel:

Each map then has around 15 or 20 significant points marked. The idea is that you can toggle between the maps, and see how different people remembered or wrote about different places or events. Not every place appears on every map, but most of them are on two or three, and Atlanta, Savannah, and Milledgeville are on all five.   But of course the maps alone can’t really tell the story, or make the kinds of arguments about the uses and possible abuses of memory. So what we decided to do was to create an animation or a mini-movie for each one of the map points. We pretty quickly realized that wouldn’t be feasible—too much work. So, we decided on 3-5 films per map, the rest done with single screens.

Finally, for the Georgia campaign I created a day-by-day blog of primary sources, which is now being updated less frequently for the Carolinas Campaign.

Followers of Pop South are encouraged to read Rubin’s book and to explore the terrific website that explores the March in greater depth.  Check it: http://www.shermansmarch.org

Error: Twitter did not respond. Please wait a few minutes and refresh this page.