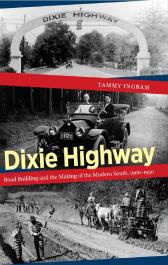 Pop South welcomes this post by Tammy Ingram, Assistant Professor of History at the College of Charleston. Her book Dixie Highway: Roads and Modernization in the South, 1900-1930 is forthcoming from the University of North Carolina Press.

I like to drive. My dad taught me how when I was seven or eight years old and turned me loose with his old one-ton flatbed truck. With the tattered bench seat pushed all the way forward, I toured the back roads around our South Georgia farm with my trusty co-pilot, a chihuahua named Scooter, perched on the seat next to me. When I was older (and legal), I ventured farther, this time with a stack of maps by my side. My best memories are from those road trips—my first solo long-distance drive to college; a cross-country journey with an old boyfriend; and speeding across the Tappan Zee Bridge at 4:00 AM on the 1000-mile trip home during grad school.

I got to know the South from behind the wheel of an automobile, just like the farmers and tourists I write about. But the South they encountered looked very different. At the turn of the twentieth century, a jumble of muddy roads covered the South like a bed of briars. Roads were not long-distance routes, but rather short paths that fed local traffic to the nearest railroad depot. Main roads branched outward from railroad towns, and thousands of miles of secondary roads linked them to farms. There were no road signs or mile markers to guide you. If you weren’t from around these parts, you’d have a hard time navigating the roads that linked isolated farms to nearby market towns but not much else.

These problems became the focus of a grassroots campaign called the Good Roads Movement. Though it began among urban bicyclists in the 1880s, by the 1910s the automobile craze had transformed it into a nationwide crusade to improve rural roads.

Between 1915 and 1927, the Dixie Highway served as the centerpiece the Good Roads Movement in the South. Made up of hundreds of local roads stitched together, the Dixie Highway looped 6000 miles from Lake Michigan to Miami Beach and back up again. It was originally planned as a tourist route to steer wealthy motorists from the Midwest to fancy vacation resorts in South Florida, but within a few years the Dixie Highway became a full-fledged interstate highway system—the first in the nation—and served tourists, businessmen, and farmers, alike.

The highway that helped to transform and modernize the South, however, reflected profoundly conservative ideas about the region’s place in the nation.

The Dixie Highway was the brainchild of Carl Fisher, an eccentric Indianapolis millionaire, and his wealthy friends in the auto industry. With the support of others in the Good Roads Movement, they used the highway to lobby for state and federal highway aid. Southern support was critical to this process. Yet in the Hoosiers’ imagining of the Dixie Highway route, the South was little more than an unavoidable place on the way to vacation paradise in South Florida.

In order to promote the highway to northern tourists, they had to market the South as a destination in and of itself, not just an obstacle separating Chicago snowbirds from the warm Florida sunshine. And in order to persuade southern voters and taxpayers to fund long-distance highways, which they derided as “peacock alleys” that served only wealthy motorists, they had to convince them that tourism in the South would pay.

They started with the name. Originally called the Cotton Belt Route, by early 1915 they had adopted a snappier sounding name that, as this blog’s author Karen L. Cox has argued, was not just a geographic reference but a brand that evoked popular nostalgia for the Old South. The Dixie Highway sounded like a road to the past as much as a road to a place. It presented the South as an exotic locale, and idea, to explore and exploit.

Although traffic would flow both ways along the Dixie Highway, its Hoosier boosters envisioned it as a path “leading down into the South,” where there existed “wonderful scenery that is most unusual and attractive” to Midwestern motorists. Some even believed the Dixie Highway could ease lingering sectional tensions. The New York Times dubbed it the “Dixie Peaceway” and mawkishly described it as “a memorial . . . symbolical of the accord between brethren which shall never again be broken.” In Illinois and Indiana, “Dixie” gas stations, restaurants, and hotels conjured up images of an unfamiliar but pleasant destination. Oil and gas companies capitalized on the interest in southern tourism, as well, by distributing road maps to guide tourists through the South.

But Yankee entrepreneurs were not the only ones who drew on stereotypes about the South. In Georgia, Dixie Highway boosters promoted Old South and Civil War tourism.

Looking backward, however, proved incongruous with the challenges of building a modern highway system. Even while southern supporters of the Dixie Highway joined the campaign for state and federal aid, they clung to old social and political institutions that preserved local control.

The most ruinous was the county chain gang. Chain gangs were not unique to the South, but by the 1920s, when state- and federal-aid highways were beginning to take shape, most states outside the region had turned to contract labor. But not southerners. Chain gangs allowed local authorities to control black labor, so southerners preserved them long after other states had abandoned them.

As soon as modern highway building challenged their sacred institutions, southerners retreated. By the time state and federal highway markers began to replace Dixie Highway markers in the late 1920s, the Good Roads Movement was dead. The backlash against the emerging highway bureaucracy did not forestall road work altogether, but it delayed the development of a modern, integrated highway system in the South for decades. The construction of the Eisenhower system in the 1950s and 1960s transformed large parts of the South, but it had little impact on the quality of local roads and state highways miles away from the interstates. In the 1980s, when I was growing up in rural Georgia, a hard rain could wash out half of the county’s dirt roads.

A few years ago, I drove one of the few remaining sections of the original Dixie Highway, a narrow road that winds through peach country near Macon, Georgia. In some spots, you can see in your rearview mirror a stretch of Interstate 75, the modern, multi-lane, limited-access freeway that replaced the Dixie Highway. You won’t see much of the South driving eighty-five miles an hour along the latter route, but the former won’t take you where you need to go. If ever there was a fitting memorial to the Good Roads Movement, this might just be it.

Wow, that was quick.  Less than a week ago, members of the band Lynyrd Skynyrd were giving an interview on CNN in which lead guitarist Gary Rossington explained that the band had disassociated itself from the image with which it’s long been known – the Confederate battle flag.  Just a few days later?  Rossington, the last remaining member of the original band, all of a sudden got his Confederate memory back and told fans on the band’s website “The Confederate flag means something more to us, Heritage not Hate.” He needed to do something, because the band’s fans threatened to secede from Lynyrd Skynyrd nation and take their dollars with them.

That stuff, as he initially pointed out, was that groups like the KKK, skinheads, and let’s go ahead and say segregationists (please) had, in his words, “kidnapped the Dixie or rebel flag from the Southern tradition and the heritage of the soldiers.”  Well, yes, but it’s more complicated than that.

THAT flag, as we know, is one of many Confederate flags, but it’s the one that draws the  most ire.  Yes, it was used by southern soldiers as they headed into battle, but let’s be clear:  by 1863 the war was over the institution of slavery and the Confederate army was there to protect it.  States’ rights?  Yes, a state’s right to maintain slavery.  There’s no getting around it.

So, let’s say you buy the idea that this was simply about southern soldiers and therefore the “Heritage, Not Hate” slogan works for you, because you don’t want to be thought of as a racist.  Then what can you say about the heritage of that symbol since the Civil War?  The war lasted 4 years, but the battle flag has often been used over the last 150 years as a symbol of racial hatred.  What about THAT heritage?

Lynyrd Skynyrd is free to do what is best for its fan base and especially its bottom dollar, but as the saying goes “don’t get it twisted”–in this case, the history.  Gary Rossington was right the first time when he said that the negative connotations of the flag had to do with “race and stuff.”  The vitriol with which the fans have responded over the band’s initial decision to quit using the flag is proof enough that race is still at issue.

And just because you say it’s about “heritage, not hate,” doesn’t make it so.