Oh, for goodness sake!  The Republican candidates for president went South and the next thing you know Mitt Romney touted “cheesy grits” and practiced saying “ya’ll,” and Rick Santorum adopted a hick accent and told people “I got kin here in Mississippi.  I’m not sure. . . (don’t say “what I think about it!”). . .I’m very proud of it.”  Shew!  That was a close one.

I think that Kathleen Parker hit the nail on the head in her opinion piece in the Washington Post that southerners deserve better from their candidates.  The one thing that she missed, however, is that Santorum, Romney, and even Newt Gingrich aren’t speaking to black southerners (or Latinos who represent the fasting growing population in the South) AT ALL.

What made it worse, for me at least, was how MSNBC covered the Republican campaigns in Mississippi and Alabama–particularly Martin Bashir and company–as they chuckled their way through a discussion of the candidates.  Believe me, there is a lot to chuckle about when you hear the gems that fall from Romney’s mouth, but that shouldn’t let Bashir off the hook.  His show began with the banjo theme song from Deliverance followed by his opening statement “Oh, my goodness, it is a deep fried primary day down in Dixie.” Really? Hush yo’ mouth!  And then, between the graphic about Good Ol’ Boys (with the faces of Romney, Santorum, and Gingrich superimposed over a former Dukes of Hazzard logo), describing the Deep South as the “Cracker Barrel circuit” and then pondering what will happen “down in Faulkner country,”  Bashir did as much to perpetuate an image of the South as moonshine-swilling, varmint-eating, backward region as did the candidates themselves.   In sum, the national media is often no better than the candidates themselves in understanding the complexities of the South and the people who live here. 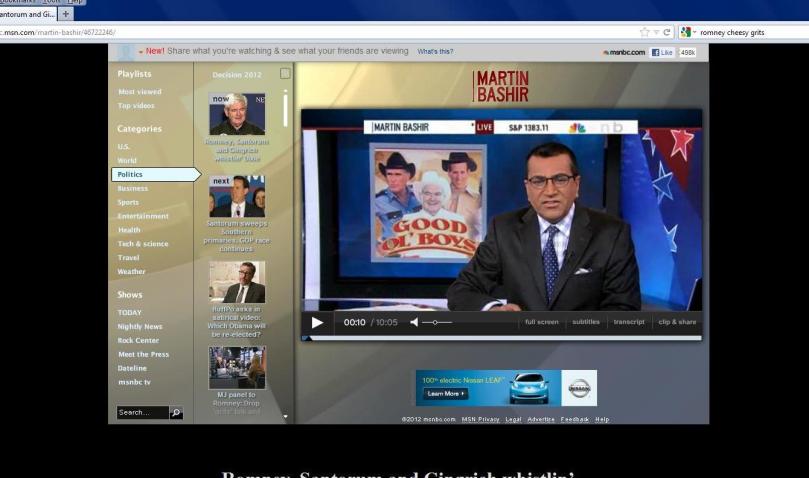 And this is what we are in for people, when the Democratic National Convention comes to Charlotte.  Because the media pundits, who are supposed to be “informed,”  will be looking for what makes this a southern city, and will likely miss what makes it as American as apple pie.