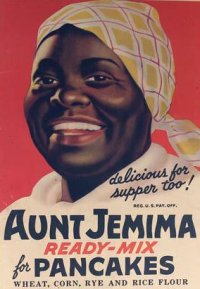 One of the most iconic advertising images of the twentieth century is Aunt Jemima, and recently the heirs of Nancy Green and Anna Harrington, just two of the women whose portraits were used as the “face” of the brand, are suing Quaker Oats for $2 billion and future revenues, claiming that not only did Green and Harrington portray Aunt Jemima, they were influential in shaping the recipe.  Attorneys for Quaker Oats are saying “hold on a minute,” Aunt Jemima might be the brand, but she was “never real.”

Yet it is also true that Nancy Green, then a Chicago domestic, portrayed “Aunt Jemima” at the 1893 World’s Fair and made a career of doing so for nearly twenty years after the fair. More to the point, Green’s face was, in fact, the first image of Aunt Jemima to appear on the pancake box.  The Thompson Agency hired Arthur Burdette Frost, better known for his illustrations of Uncle Remus tales, to paint Green’s portrait.

If she contributed to the recipe, we may never know, but we do know that white women often took their maids’ recipes and passed them off as their own, a tradition that even Paula Deen maintained when she co-opted recipes from Dora Charles, a black woman who had worked in Deen’s Savannah restaurant for years.

It is true that several black women portrayed Aunt Jemima at various state fairs during the early decades of the twentieth century. They greatly assisted the brand by lending an authenticity to the product as being a particularly “southern” recipe.  This was in keeping with the character created by the Thompson Agency, whose story was that Aunt Jemima had been a slave and that she created the recipe that brought her such fame that it caused jealousy among other mammies.

But on radio, it was a different story. In a short program called Aunt Jemima Radio, which ran from 1930 to about 1942, she was portayed by several white women who were essentially doing a radio minstrel act. One of those women was Tess Gardella, an Italian-American actress from Wilkes-Barre, Pennsylvania. Gardella had played “Queenie” in the stage version of Show Boat, and she parlayed that experience into performing as Aunt Jemima on the radio. She also played Aunt Jemima in a film short.  It is even on her gravestone.

Tess Gardella is also interesting because she filed a lawsuit against NBC for allowing an “imposter to broadcast as ‘Aunt Jemima,’ when as a matter of fact she [Gardella] had been using that name for years on stage and air.”  The actress further claimed that she had the right to use the name “by virtue of authority from the Quaker Oats Company.”  She won her lawsuit and nearly $116,000 in damages.

The heirs of Nancy Green and Anna Harrington may have a difficult time in the courts because, unlike Gardella, they did not have a contract.  Still, their lawsuit brings into sharp relief the ways American companies have profited by using images of African Americans to brand their products.

*Some of the ideas expressed in this post are drawn from Dreaming of Dixie: How the South was Created in American Popular Culture (UNC Press, 2011), 40-41.

Next week I’ll be giving the annual Low Lecture, co-sponsored by the Department of History, at the University of Maryland Baltimore County.  The good people there made this nice poster to accompany the talk.